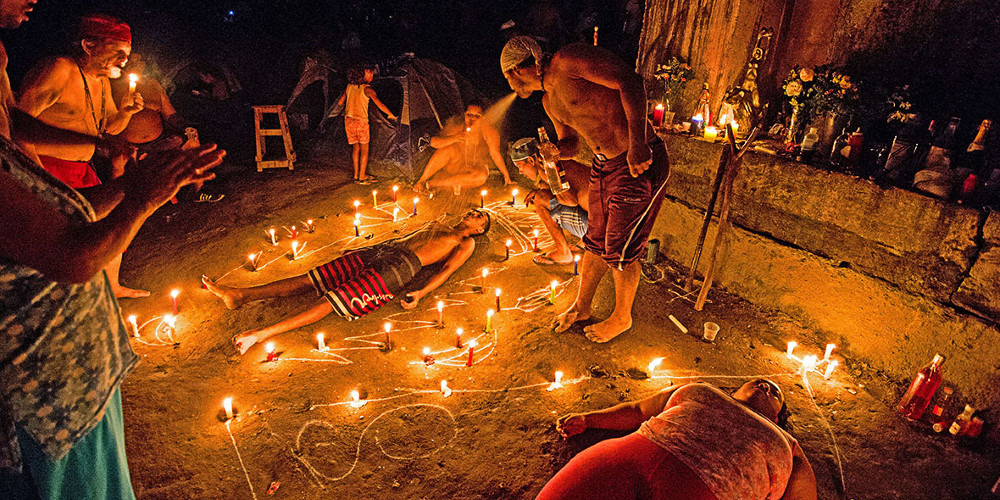 Being immersed in the metaphysical world with all the offerings that come with it in beliefs of unseen energies, psychic gifts, channeling, spirit communication, alternative dimensions, fairies, angels…and the list goes on and on, I have always been curious also about the fringe elements of magick and spirit held religious beliefs from other tribal origins.

Two of those are the practice of Santeria and Voodoo. I have met a few people that practice these religious ways of life and they are absolutely adamant that most people do not understand what they are about or how they are practiced. Always they say they are no different than our metaphysical rituals or church rituals. Well maybe except for the dead chickens.

One of the most common misconceptions is that Santeria and Voodoo are somehow connected and the same, they are not. What is similar is that Santeria and Voodoo are religions practiced by people who believe in one God that is served by several spirits. Both religions also believe in possession of the spirits—called ‘orishas’ in Santeria and ‘loas’ or laws in Voodoo—through song and dance. In both religions, the loas or orishas and ancestors are identified with the Catholic saints. Santeria means ‘way or honor of the saints’ and is mostly a Spanish word, while Voodoo has an African origin and means “moral fiber.”

After doing a little research, I found many interesting facts that do separate them in practice and beliefs. Here is a brief synopsis of both. But one thing is for sure, many mysterious and magick practices are part of the faith, just as in wiccan and many metaphysical beliefs.

Santeria means ‘honor of the saints’ or ‘way of the saints’. It is also known as ‘Lukumi’s Rule’. On the other hand, Voodoo is an African word that means “moral fiber.” The two were brought to the Western Hemisphere by slaves from North Africa, specifically Nigeria. Since African traditional beliefs and other pagan activities were outlawed and banned, the slaves infused their pagan beliefs with Christianity to avoid persecution and death.

Voodoo developed similarly in New Orleans but with the influence of French and American culture. Voodoo originated primarily in Haiti. Slaves who brought Santeria and Voodoo to America are also different. The slaves who brought Santeria were indoctrinated to Catholicism, while those who brought Voodoo were not immersed in it. Compared to Voodoo, Santeria uses a lot of animal sacrifices, sometimes on a daily basis. Voodoo believers practice their animal sacrifices on a smaller scale. Santeria is not an official religion and is less popular and well known than Voodoo, which is the official religion of Haiti and has been depicted in media and popular culture, albeit often inaccurately and in a bad light.

Racist depictions of Santeria and other Voodoo practices include depicting the religions as black magick and satanic. It is common to portray these religions as nothing more than harmful spell casters focusing on zombifying people, using voodoo dolls to harm people, or engaging in cannibalism or pacts with the devil. Just an FYI, the use of dolls in magic comes from European witchcraft traditions not Haiti. Satan does not exist nor is worshipped in Santeria nor in Voodoo.

Now do both religions have the ability to control the elements through ritual? Of course! Just as many light workers use energetic visualization and healing work. But because of the ritual magick, animal sacrifices and guarded secrecy due to fear and misunderstanding, both Santeria and Voodo remain shrouded in dark guarded mystery. Most people who have issues with theses tribal religious beliefs is about the animal sacrifice. Animal lovers are appalled at the idea but being respectful of other’s beliefs is the key here. You may not like it, understand it nor accept it, but honoring their right to practice it is essential for being spiritually open minded.