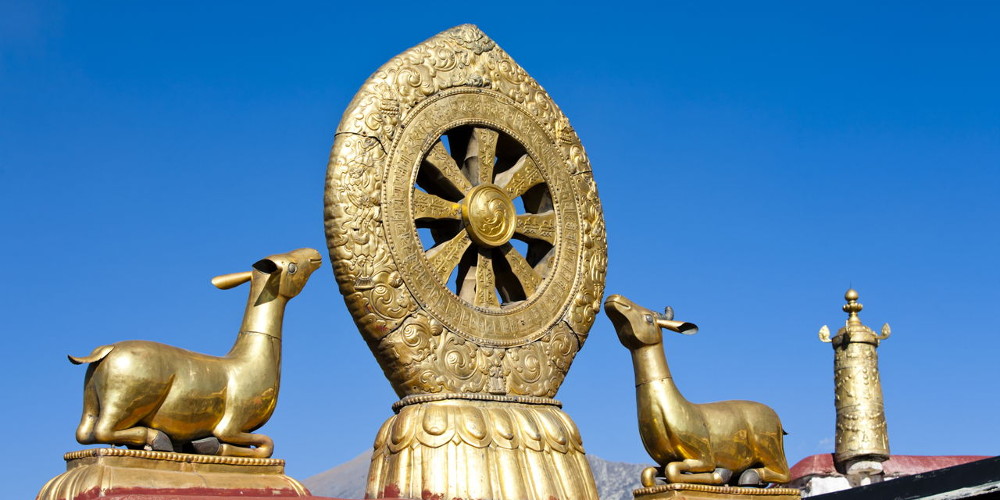 Regardless of what your spiritual beliefs are, you will inevitably have your personal symbol of the mystical road you are journeying on. Whether it is a cross around your neck, a rose quartz healing bracelet to bring you love, a Hamsa symbol to keep the “evil eye” away from you, a Buddhist symbol, Druid, Wiccan, Easter Island statues or one of your own choosing, it makes a powerful energetic life force statement to those who see it on you.

Spiritual symbols are everywhere in our world and in every culture! There is no religion, no culture in any part of the world where you will not see symbols that make a spiritual statement, what beliefs you are being shown of that culture to just being an intriguing and artistic piece of work that might have caught your eye. Symbology is such a predominant announcement, it is pretty much impossible to identify them all. You may even be wearing one around your neck, on a bracelet or own a piece of artwork in your home.

Doing a little research on different cultures and spiritual beliefs, here are the most major and recognizable spiritual symbols we see almost everyday.

Hamsa is the Hebrew word meaning “five” and is represented with a palm-shaped amulet and an eye in the middle of the palm. Used by many societies throughout history, its purpose is to ward off negative energy and the “evil eye” with a malicious stare that’s said to cause unluckiness, illness, or even death.

2. The Flower of Life

This spiritual symbol is said to contain all the patterns of creation in it and possibly the most ancient symbol on this list, used since the time of the Sumerians (the first civilization in the world). It is composed of seven overlapping, evenly spaced circles with the figure forming a flower-like pattern that’s structured like a hexagon.

This is probably the most recognizable symbol since Westerners have taken an interest in Eastern philosophies. Used extensively in Chinese teachings, this symbol represents the harmony of the universe. All duality- no matter how dark or light, masculine or feminine needs balance.

This symbol unfortunately is solely associated in the Western culture with evil. It is often labelled as “satanic” but the actual meaning of the design symbolizes the qualities of man. The top point representing spirit, while the other points representing the four elements. Wiccans use this symbol in sacred ceremonies to remind themselves of the elemental nature of humankind.

5. The Star of David

The Star of David is one of the most well-known symbols in today’s society. Most people believe it represents the shield King David used in battle. Another theory being the sacred geometry of the 6 directions in space. Up, down, east, west, north, south, and most importantly, center (as in mankind’s spiritual center).

This is the symbol of the primordial sound of God, by which the universe was created. Every religion in every culture has the Om sound in it. The sound of Om brings to the practitioner a deep meditation and universal insights to the forefront of one’s existence.

The fish of Christianity was used in the early days of the religion as a secret way to tell others they followed the teachings of Christ. The Christian version is that Jesus told the apostles “I will make you fishers of men” but the real origins of the symbol came from Pagan religions and represents fertility, birth, and the natural force of women.

History shows the cross was used centuries before it became a representation of Christ. The Egyptians used cross symbols in abundance, as did the Hindus. It was not until the time of the first Christian Roman Emperor Constantine, three centuries after Christ and after he rewrote the bible, that he chose the symbol of the cross as representation of Christian sacrifice to be free of sin.

Used in ancient Egypt, the Eye of Horus was often worn as an amulet to give safety, health, and wisdom to the wearer.

Used in various eastern religions, the lotus is regarded as a representation of enlightenment. Since enlightenment is the ultimate objective of humanity, it reminds us that any trial can be overcome through perseverance.

The Wheel of Dharma is the Buddhist spiritual symbol for the teachings of those on the path of Nirvana. Each spoke represents a step in Buddha’s Eightfold Path. Although the symbol itself is actually older than Buddhism, dating back to 2500 B.C.

Whatever symbol you are drawn to, regardless of your religious or spiritual beliefs, is what your energetic body tells you is comfortable and belongs to you. Whether it be a past life or making a statement in your present journey, the symbology you choose to connect with tells a deeper story of who you are than just a pendant, bracelet or piece of artwork.