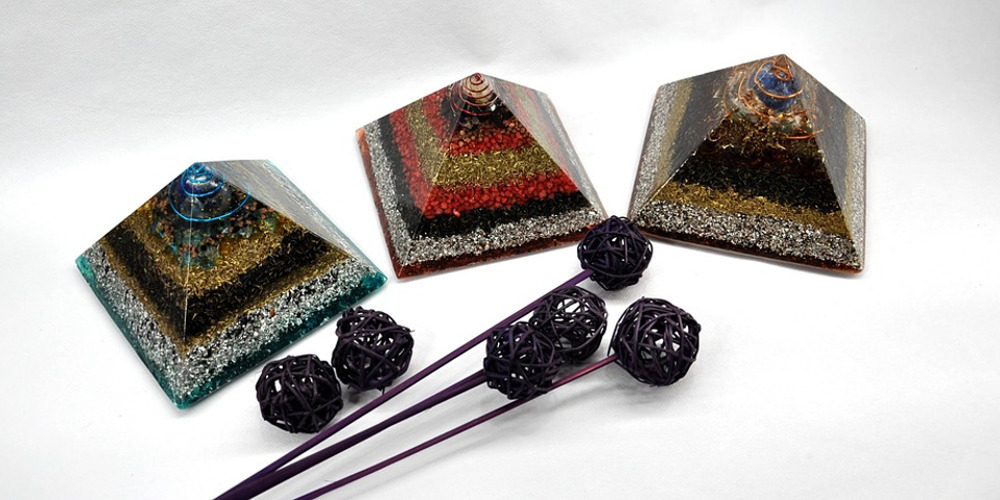 Orgone pyramids are definitely a beautiful piece of eye candy but not only being beautiful, they have the powerful ability to bring us into healing harmony and balance. Most orgone units are made into some shape of a pyramid or cone but also can be made into jewelry to wear and just about any shape or form their creator chooses. They are relatively inexpensive and can be found in metaphysical stores and on-line shops.

What an orgone is by definition is another name for our life force energy known as chi, prana or ether. Orgone pyramids are powerful and in beautiful forms known for their ability to convert negative energy into positive energy, balancing the spiritual, emotional and physical body. Orgonite is a substance made of resin, metals, healing crystals and quartz that balances and harmonizes our bio-energy.

Dr Wilhelm Reich, an Austrian psychiatrist, researched orgone energy in the earlier half of the 20th century and all orgonite devices are built on his findings. While conducting his research, Dr. Reich found that organic materials attract and hold orgone energy, while non-organic metals simultaneously attract and repel the energy.

Orgonite is based on these two principles. It is a 50-50 mix of resin (organic, due to the fact that it is based on petrochemicals), and metal shavings (inorganic). A quartz crystal is also added to the orgonite mix. It gives off a charge when it is put under pressure (resin shrinks when it is cured, so constant pressure is put on the quartz crystal). Due to the fact that the elements contained in orgonite are constantly attracting and repelling energy, a “scrubbing” action takes place, and along with the charge that the crystal gives off, this cleans stagnant and negative energy and brings it back to a healthy, vibrant state. Think of an orgone pyramid as a filter for toxic energy in the atmosphere (like positive ions from emfs).

Here are the basic properties of orgone energy (life force) according to Wilhelm Reich:
Organic materials attracted and held orgone energy.
Non-organic metal materials attracted and then rapidly repelled it.
It fills all space and is everywhere.
It’s mass free and is the primordial, cosmic energy.
It penetrates matter, but at different speeds.
It pulsates and is observable and measurable.
It has a strong affinity and attraction to/by water.
It is accumulated naturally in the living organism by ingesting foods, breathing, and through the skin.

A simplified explanation of how it works is negative energy moves through the device, it’s exposed to electromagnetic friction, an environment created by the mixture of metal shavings and crystals in the resin. This force ultimately reorganizes the energy into a more harmonious wavelength as it exits the pyramid. The chakra system works in a similar way and has the same effect as Reiki treatment. Our seven major chakras are vortexes of energy. Each chakra has a different function and if there are any blockages in energy flow in our chakras, this can result in psychological and psychological symptoms like disease or mental complexes.

Since the turn of the new millennium, these orgone pyramids have become a popular energy tool in holistic and healing circles and strongly endorsed for personal space. It creates a powerful healing effect by balancing the electromagnetic energies in our environment. From cell phones, Wi-Fi, smart meters and other wireless technology, it’s not an exaggeration to say that we live in a sea of invisible electronic pollution. The common effects reported from electronic frequency pollution are fatigue, irritability, lack of concentration and a long list of physical health issues.

Listed below are some of healing benefits of an Orgone Pyramid:

(READ: How To Use Tarot To Reach Your Goals)

I own several of them and have felt the difference after having an orgone pyramid on my body, in my room or just holding one. Each orgone pyramid is made with a different energy to be cleansed and addressed. Some for stress, some for spiritual growth, healing, some for protection and others for lucid dreaming. It basically depends on the skill of the maker and their knowledge of the stones and metal design they are using. The pyramids have the ability to balance your energy and what surrounds you. It’s worth looking into.