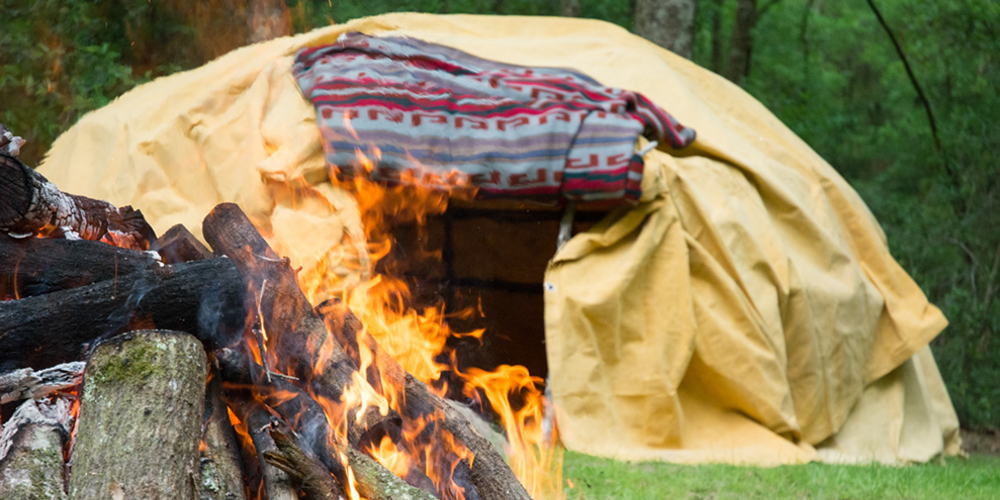 Wikipedia’s definition of a sweat lodge is very precise, to the point, and as usual tells you what it is, but doesn’t touch upon the “why?” of it. I personally did a Native American sweat lodge ceremony and was an absolute total failure at it. Even with the suggestions of “just put your hand outside the tent, well how about your hand and your arm or how about adding one leg to it and then you will be able to stay.” I totally wussed out and had to leave and get some fresh air and jump in the pool. Never could do Bikram hot yoga either. Lol! At the time though, I was really, really into anything Native American, so I was completely bummed out that I couldn’t do what is considered one of their time-honored traditions.

The desire to “sweat it off” is by far no new ‘fad’ of the day. History shows many cultures have found ways to sweat out their demons. In the United States, sweat lodges are largely associated with the Native American tradition but has also been connected with many other cultures around the world. Humans have been taking part in ritual sweats for thousands of years. But as with any activity that involves extremes, the ceremony is not for the faint hearted nor without risks.

Sweat lodge ceremonies are so much more than just about sweating, they’re purification rituals used for a broad range of purposes, depending on the culture and the occasion. Most sweat lodge ceremonies practiced today are used to give thanks, to heal, to seek wisdom, and to purify the mind, body, and soul. It goes without saying that sweat lodges get hot—really hot. Most lodges stay at over 100 degrees (F) throughout the ceremony.

Even if you’re in perfect health, dehydration and heat exhaustion can be a real danger if not promptly recognized and treated. If you start to feel dizzy, weak, or faint, it’s 100% acceptable to ask for help and leave the lodge for a break. (that would be me) The leaders, who train for 4 to 8 years before they can conduct a ceremony on their own, should be there to help you in case this happens. If you are surrounded by “gee this sounds like fun” novices, don’t walk, run in the other direction, as you are risking your health if not properly supervised.

Native American sweat ceremonies typically take place in domed, circular lodges that are either covered in blankets, branches or tree trunks. A fire is lit inside and tended by the firekeeper who keeps the stones heated to keep the lodge hot. The stones are placed in a hole in the center of the lodge, often adding tobacco, cedar or sweetgrass as an offering. Prayers are also shared while pouring water over the rocks to create the thick steam.

Here are some of the important differences between just partaking of a Sauna (which detoxes your body) and a Sweat Lodge.

(READ: Out Of Body Astral Projection)

Not being one of the tough ones who was able to stick out the heat in the sweat lodge ceremony, I of course, am the last one to rah, rah you on to try one but I have known many who have done one or several, with or without the extra hallucinatory drug to complement the experience and have forever been changed for the better. So, if you are brave enough to handle the heat, as they say, then if given the opportunity, I would highly recommend it. Namaste