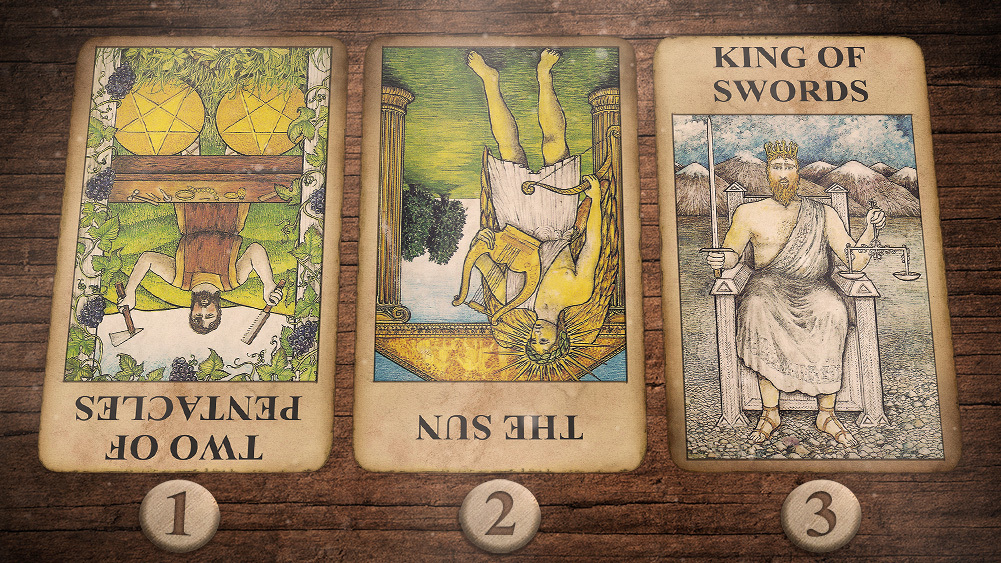 More often than not, if the reversed Two of Pentacles turns up for you in a daily tarot draw, it will be during or shortly before a time when you are feeling completely overwhelmed. This card usually speaks of biting off more than you can chew, taking on more than you can handle, getting in over your head or simply having way too many irons in the fire. If you get this card in your daily tarot draw, it is time to step back and do a major reassessment of all that you are trying to do or take on at this time. You need to prioritize and learn to pick your battles. Delegate if needed. Among the indications of the reversed Two of Pentacles is an imbalance in the different areas of your life. You may be spending too much time on work/business matters and allowing family concerns to fall by the wayside. It also indicates that you are making poor choices because you are under pressure and may be getting yourself into more of a mess than you need to. Reversed, the Two of Pentacles may find you feeling overextended, overwhelmed, greatly lacking in organization and stretched way too thin. Something that is strongly suggested by the reversed Two of Pentacles is that you should always have a backup plan or plan b in all things.

If The Sun comes up reversed for you in a daily tarot draw or a full tarot reading, it is often to bring your attention to an overwhelming sadness around you, a rather pessimistic outlook or, more seriously, a deepening depression. This card is not to be taken lightly as it may well be trying to bring your attention to a more serious and quite negative mental or emotional situation. The Sun reversed does not usually speak of negative situations and/or circumstances that are out of your control. Rather this card will turn up for you to help you see where some changes need to be made, especially in your general thought process and overall outlook on either a single situation or several. Basically, The Sun reversed may turn up to tell you that you are bringing much of the negativity and harsh ramificatins on yourself. So, make a change. Rework your thought process and adopt a brighter, better outlook. Be more positive! Also, it is never too late to change. Focusing on the good and the positive may be quite difficult and will take much effort because by the time this card shows up for you, odds are good that your mind is already in that dark place. This card can also indicate a lack of enthusiasm for life, being unclear on the right path to take or being unable to see the way forward. The Sun reversed may show that you are letting negative energy/thoughts close you off to the happiness and joy that are all around you. You have the power to change this by simply allowing yourself to be open to the positive things that are coming your way and by finding gratitude for the good things in your life. Alternatively, The Sun reversed can also be an indicator of being overly enthusiastic or confident to the point that it becomes a negative trait. For example, you may be being so overly confident that you are actually becoming egotistical or arrogant. Or you may be so enthusiastic about achieving your goals that you haven’t stopped to check if they are actually realistic.

The King of Swords often turns up in your daily tarot draw representing structure, routine, self-discipline, power and authority. This card is indicative of being methodical, using your head, mind over matter and the head over the heart. It signifies logic and reason, integrity, ethics and morals. The King of Swords can represent legal matters, law enforcement, military, police and judges. As a person, the King of Swords is a mature male who is cool, self-disciplined, intelligent, honest and strong. He is rational, logical and a deep thinker. He does not like to publicly display his emotions and prefers to use his intellect over his emotions to deal with situations. He is a great conversationalist and fiercely loyal and protective of his loved ones. He does well in structured environments and needs to have a routine to operate at his best. He can be clinical and stern. In the extreme negative, he can be a bully or a tyrant and he can be cold or distant if someone is too irrational for his liking. But generally he is analytical and fair-minded. He takes his responsibilities seriously, is dependable and plays by the rules.