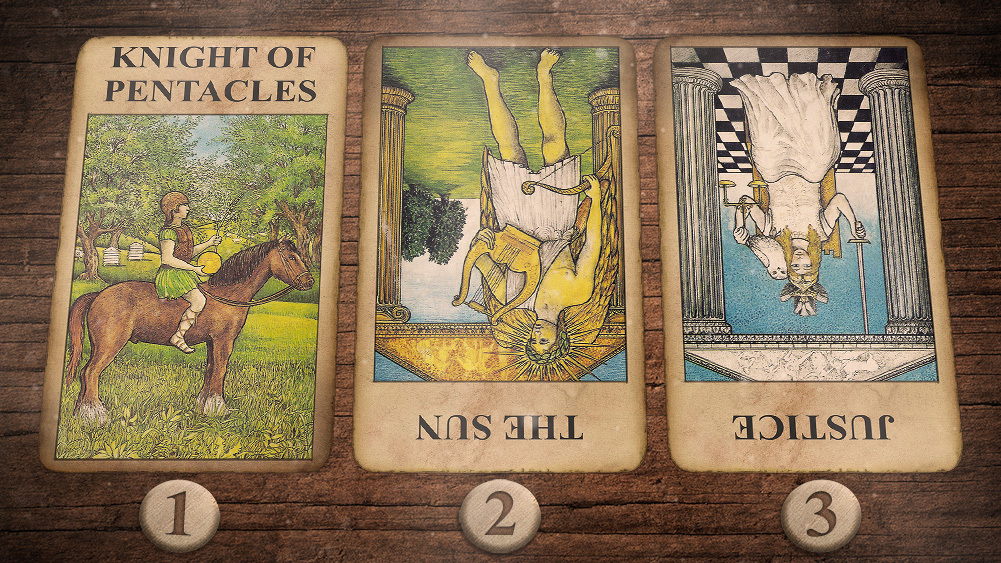 The Knight of Pentacles represents common sense, responsibility, practicality, working hard for what you want and finishing what you start. Among the varied awesome signs and indications of the Knight Of Pentacles is wishes being granted and dreams coming into existence. Two aspects of the more successful individual are perseverance as well as their own focused and determined effort. This card may turn up in your daily draw as a warning to take extra precautions to guard yourself, your own health and the health and well-being of those to whom you are closest. The Knight of Pentacles also talks a bit about securing and maintaining solid and firm boundaries. When speaking on a person, the Knight of Pentacles may be referring to an overly sensitive relative or another personal connection in your life. This person is most likely also highly conservative, organized to a fault, excellent with money and helping others succeed. Lastly, they may be a strong animal activist or hyper sensitive emotionally and very much an environmentalist. This person is also quite loyal and reliable as well as stable and patient. He is ambitious, hard-working, protective, conservative, honest and rather stubborn. Quite often, this young man may have great difficulties in showing emotion and this is most likely due to him having been raised primarily by a man who also had tremendous difficulty allowing their internal light to shine. The Knight shows he cares by working hard to provide for the people he loves much like the father or male role model in his life did.

If The Sun comes up reversed for you in a daily tarot draw or a full tarot reading, it is often to bring your attention to an overwhelming sadness around you, a rather pessimistic outlook or, more seriously, a deepening depression. This card is not to be taken lightly as it may well be trying to bring your attention to a more serious and quite negative mental or emotional situation. The Sun reversed does not usually speak of negative situations and/or circumstances that are out of your control. Rather this card will turn up for you to help you see where some changes need to be made, especially in your general thought process and overall outlook on either a single situation or several. Basically, The Sun reversed may turn up to tell you that you are bringing much of the negativity and harsh ramificatins on yourself. So, make a change. Rework your thought process and adopt a brighter, better outlook. Be more positive! Also, it is never too late to change. Focusing on the good and the positive may be quite difficult and will take much effort because by the time this card shows up for you, odds are good that your mind is already in that dark place. This card can also indicate a lack of enthusiasm for life, being unclear on the right path to take or being unable to see the way forward. The Sun reversed may show that you are letting negative energy/thoughts close you off to the happiness and joy that are all around you. You have the power to change this by simply allowing yourself to be open to the positive things that are coming your way and by finding gratitude for the good things in your life. Alternatively, The Sun reversed can also be an indicator of being overly enthusiastic or confident to the point that it becomes a negative trait. For example, you may be being so overly confident that you are actually becoming egotistical or arrogant. Or you may be so enthusiastic about achieving your goals that you haven’t stopped to check if they are actually realistic.