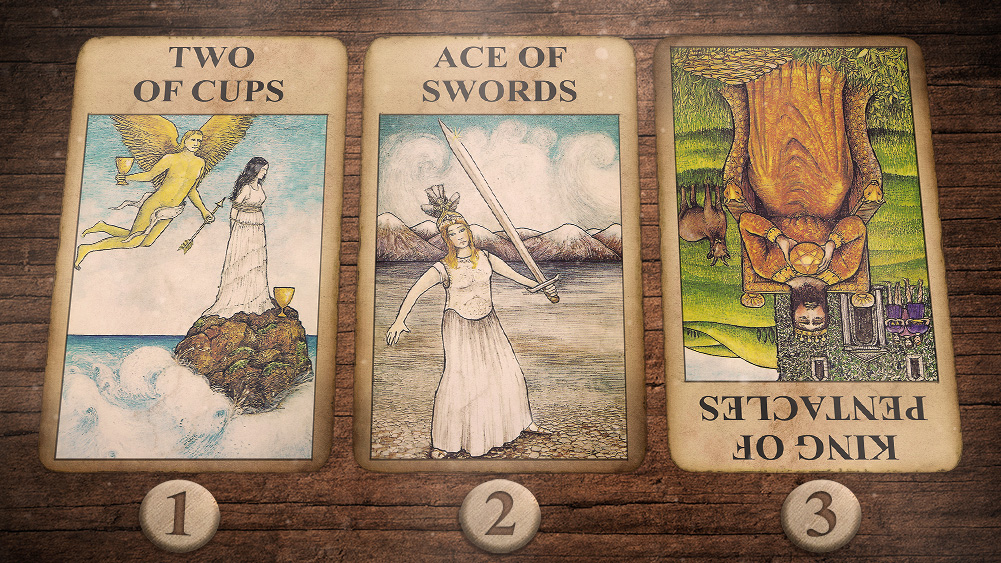 On the Two of Cups, we see a woman standing alone on a rock formation out in the sea with waves crashing up on the rocks toward her. Behind her is hope and the potential for rescue or salvation. She also has a cup of opportunity before her on the rock formation. This card came up reversed for you today. If you are struggling in a romantic relationship, the time for action is now. Either make it or break it. As we look at this card, it talks about one person expending the effort while the other is just going through the motions. So, it is time to get your partner to either step up or step out. Change is looming and with this card being reversed, it tells us that the change will be a somewhat easy process and ultimately in your favor. Through her isolations, we see there will be struggles to get to where you need to be. But the end result will be so well worth it.

The King of Pentacles, reversed, often speaks of the dark side of wealth and the dark negativity of being selfish and self-serving and of greed. When this gentleman shows up reversed in your spread or daily draw, it calls for a need to reassess your values and what is ultimately driving you. Are you doing what you are doing for the right reasons? How will your actions to progress and achieve your goals affect others? There is absolutely nothing wrong in doing for yourself and working to succeed. In fact, that is highly encouraged. But you need to have boundaries and balance and the reversed King of Pentacles sometimes serves as a reality check of sorts. Kings often wield great power and are capable of accumulating tremendous wealth. This is also true for you. The ability to accumulate wealth and power is certainly within you as long as you are driven by the right motivation. The King of Pentacles shows a man seemingly of status and power, made evident by his crown, sitting in a fine chair in front of his apparent massive home with the vast rolling hills of his property behind him. He holds up a coin as if showing you what is possible. By being reversed, he warns that greed will ultimately lead to loss, be it financial or in some other important area of your life. Always be sure you are acting with the right motives and determination.