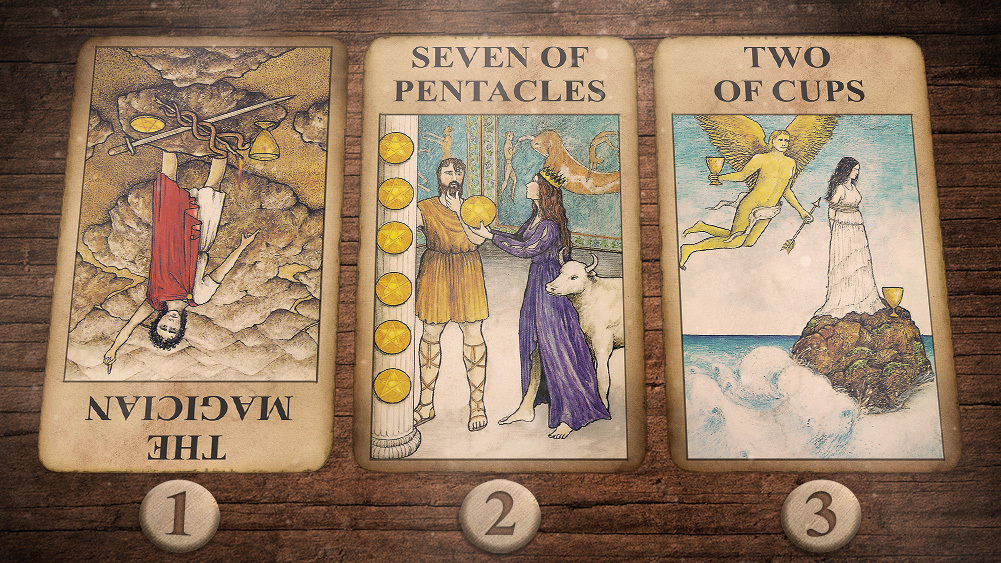 Mercury FINALLY went back direct earlier this week. Thank goodness!! I do not pay attention to or have anything at all to do with astrology except when it comes to Mercury retrograde. Mercury retrograde periods last three weeks and can wreak havoc on electronics, all kinds of communications, our ability to think clearly and can greatly skew our plans, among other negative concerns. For me, personally, each period will be one extreme or the other. I either sail right through not even noticing Mercury is in retrograde, or everything that can go wrong does go wrong. This particular period has really kicked my butt and I’ve just wanted to hide under a rock since early October. Although the actual time frame is three weeks, some people can experience issues as early as two weeks before or as late as two weeks after.

The Magician tarot card is much like life in that it can sometimes represent magic as being slight of hand. When it comes up reversed for you in a daily draw as it has today , it urges you to proceed with caution, especially when dealing with someone of questionable character. One of the other things The Magician, reversed, urges you to be on the lookout for is opportunity. This card indicates hidden opportunity and unexplored options available to you. It urges you to have confidence in yourself and your abilities, knowledge and skills. Stop comparing yourself to others and know that you deserve what is due you and that you are capable of so much more than you give yourself credit. If there is a particular job you desire but feel you are underqualified, put in for it anyway. You stand to lose nothing by at least trying and may be very pleasantly surprised. If you have been considering asking out your cute neighbor but fear you do not measure up, take a chance anyway and put yourself out there. Again, you have nothing to lose. Maybe they will accept, maybe they will not, but at least you tried. Reversed, The Magician also may turn up for your daily draw to warn against someone in your energies who does not have your best interests in mind. This would be someone looking to use you or take advantage of you in some way. This card serves as a warning about greedy and/or deceitful people around you.

On the Seven of Pentacles, we see goods being traded for money which can often indicate your hard work and efforts will soon pay off and you will be reaping the rewards of your figurative or literal harvest shortly. Whatever you have been working so hard toward will be coming to fruition in the very near future. The Seven of Pentacles falling upright in any spread is always a wonderful card to receive. It is an omen of success as well as attaining goals and ambitions. Now is the time to visualize and manifest the things and/or situations you most desire. Zero in on what you want and do what needs to be done to make it happen. This card can also indicate being at a crossroads and struggling with which direction to take so it is time to step back and do some reassessing of your situation and in some cases your life overall. As with most all cards either upright or reversed, there is at least a minor concern associated with this card. It may come up if you have been stalling on a project or financial decision. Stop dragging your feet and make a decision then stand by it.

An awesome card to receive in your daily draw or any tarot spread is the upright Two of Cups. The very most basic meaning behind this card is complete harmony in love and quite often foretells of a new and very positive romantic connection around you. While the Two of Cups quite frequently speaks of romantic love, it can also indicate growing respect and admiration as well as you being held in high regard in friendships and partnerships of all kinds. When the Two of Cups appears for you, it usually indicates that life, overall, is going well for you, or at least will be very soon. Any current negative life issues will be smoothed over and rectified in the near future. It does not speak much of cause for celebration, but rather more personal victories that are to be quietly celebrated by yourself and possibly with someone quite significant to you such as a romantic partner or your closest friend. While the Two of Cups heralds wonderful things taking place in your life and well on their way to you, it is also a rather understated card. The Two of Cups speaks of equality and balanced relationships as well as an overall balanced and good life. It can also indicate a sudden increased popularity so enjoy the added attention but do not question it.

How Much Is Too Much When You Love Someone?