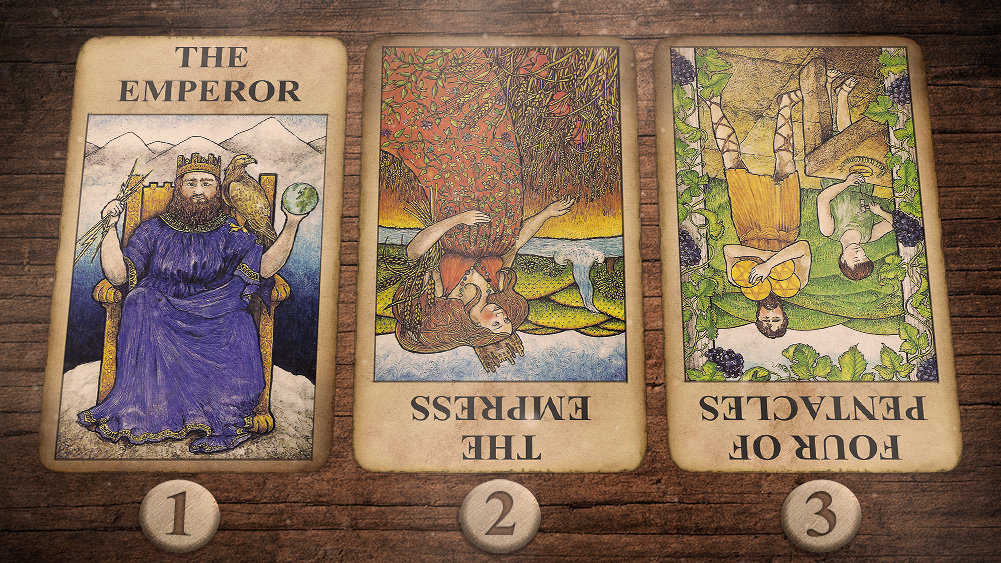 The overall prevailing message behind The Empress reversed in a daily Tarot draw is femininity, grace and poise. She is also an excellent mix of masculine and feminine energies and qualities for both men and women. For individuals who identify as a real man’s man, The Empress reversed will show up urging you to be more in touch with your feminine side and with such things as your emotions and the more caring and compassionate side of yourself. You are or will soon be facing a situation in which you must rely on a balance of energies to see things through successfully. The Empress reversed may also be showing up to bring your attention to a rather serious imbalance around you such as putting the betterment of others above your own and quite possibly to your own detriment. You may have found yourself in a rather oppressive or draining emotional situation and need to regain your faculties and restore balance between head and heart to get out of it. This reversed lady may also be trying to get you to see how you may well be neglecting persons or situations important to you. A rather key indicator of The Empress reversed is how you have recently come to see yourself as possibly being less-than or undeserving; it is entirely possible you do not fully grasp your worth as a person or your own beauty, grace, intelligence. For those struggling in personal relationships, The Empress reversed will show up in a daily draw to bring your attention to the fact you are very likely not allowing the world to see you for who you truly are or to see your true colors. This is especially fitting in the obsession so very many people have with social media and how it is all too easy for us to put on one face for all the world to see while, in reality, we do not truly embody that persona at all. This kind of deception will tremendously work against you if you are seeking a truly fulfilling and long-lasting romantic connection. Do not ever pretend to be someone you are not. That is a surefire recipe for disaster.

If you see reversed Four of Pentacles in your daily draw, it is time to let go of an old, possibly outdated mindset. It is time to release anything and anyone that has become toxic to you, your life and more importantly your future. Stop holding on to the past and work to shake off all the “junk” and to move forward into brighter, more fulfilling situations and relationships. Basically, clear out the old to make way for the new. Be careful that you maintain a good balance in the process and that you do not go against the age old saying, “Don’t throw out the baby with the bath water.” On the flipside, Four of Pentacles reversed may turn up for you to bring your attention to loss of something significant through your own recklessness such as gambling or taking silly chances; being reckless. As well, it could be warning you to fully release the need and desire to be so controlling of others in every area of your life. Adopt a more open and tolerant view, but again, take no silly chances. Reversed Four of Pentacles can be an excellent indicator in terms of love and romance. This card speaks of releasing old fears and baggage in order to establish healthier love connections. If you have been single for a while, this card will turn up to let you know it is time to get out and meet new people, make yourself available for love. It also heralds that the time has come to give yourself closure on past loves as you will most likely not ever get it any other way. You must now firmly put the past in the past and leave it there. When it comes to career and finance, Four of Pentacles reversed is a stern warning to always act with scruples and solid, upstanding morals lest you fail miserably and in a very public way. Reversed Four of Pentacles is also a very strong warning against falling for get-rich-quick schemes, but more importantly, against attempting to scam others out of their own hard-earned money.

Why You Are Attracted To Unavailable Partners