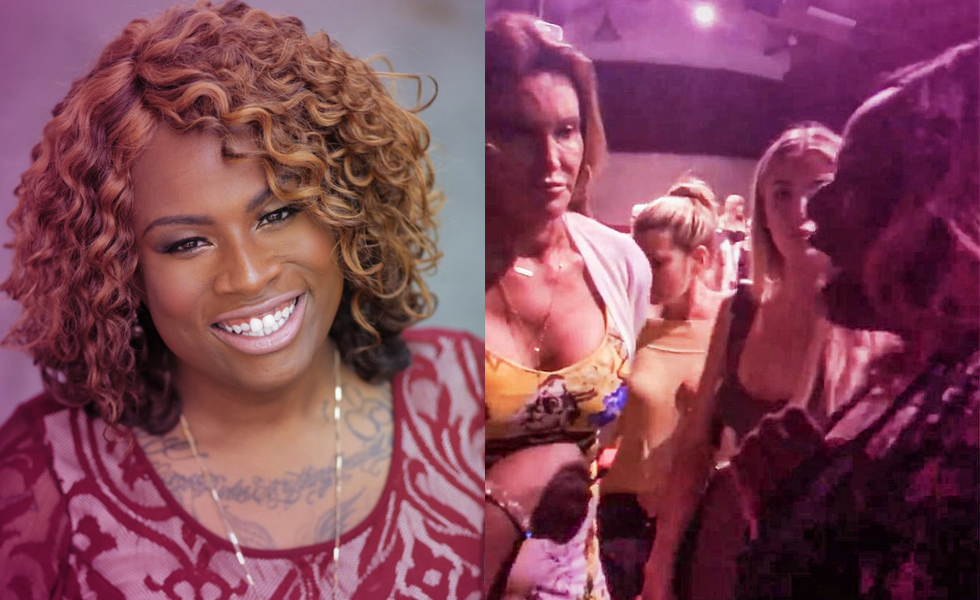 It was inevitable that Caitlyn Jenner was going to have to explain her support of Trump who is taking privileges away from the LGBTQ community and forcing them to have to fight all over again for recognition, benefits and respect. Well it finally happened at the L.A. event of Trans Chorus. No punches were spared and Caitlyn could not get out of the line of fire fast enough. In her support though, she was just out enjoying an evening with friends but that kind of hypocrisy will follow you into your choice of bathroom stall for sure. Jenner defends her support as a Republican for Trump, saying she can do more for the LGBTQ community from the inside versus being an adversary. Okay, score one for Caitlyn on naivety.

Transgender activist Ashlee Marie Preston confronted Caitlyn Jenner at the Trans Chorus of L.A. event over the weekend in a now viral video. Preston was furious that Jenner, whom she believes committed the “ultimate betrayal” of the LGBTQ community by supporting President Donald Trump, was at the event and also called out the Trans Chorus as “complicit” for accepting the reality star’s money. Preston, who serves as editor-in-chief of Wear Your Voice magazine, used her face time with Jenner to critique her support of the president, particularly after his enactment of the transgender military ban. To escalate the situation even further, Jenner was spotted wearing one of Trump’s “Make America Great Again” hat just days after the ban was announced.

“You’re a fucking fraud,” Preston said in her video, which has so far roughly 300k views on her personal Facebook. “It’s really fucked up that you continue to support somebody… that does everything with the military, that’s erasing our fucking community. And you support it.” Preston has since resigned from the Trans Chorus of L.A. She told HuffPost that she “felt the mission on paper differed from the active mission, which didn’t align with my personal values.” Now Preston thinks Jenner owes the LGBTQ community an apology.
Preston also took to Twitter on Sunday to defend her actions.
#Desperate times call for #desperate measures. A #loud, #angry#black #trans #woman” is more effective than a #dead one.#SilenceIsDeath
“Caitlyn Jenner is a text book case on cognitive dissonance and her vote against her own supposed interests made that evident,” Preston said. “She owes the community an apology; giving us the change from her bra is like putting a band-aid over a bullet wound. Her commentary and actions have carried real consequences for the transgender community; people who aren’t afforded the same protections and privilege as she has.”

Well if there ever was a classic situation of…” you can’t have it both ways”, this would be it. Regardless of her wealth, position and privilege which allows her to by step bothersome doors being shut in her face or getting beat up on the streets for your lifestyle choice, eventually Caitlyn will have to come to grips she backed the wrong donkey in her politics.

Ten of Swords:
Life giving challenges and hard times in order for you to grow emotionally or spiritually. I feel Caitlyn will be coming up on these moments when she will have to reconsider her party allegiances.

Strength: Inverted (Upside Down)
Pulled inverted, I can guarantee Caitlyn quietly carries a lot of inner strength but also stubbornness. It is that stubborn streak she has that does not allow her to step up and accept she may have given too much credit to the man she voted for.

High Priestess: Inverted
Self-sufficient but can also feel isolated and alone. Pulled inverted, this clearly shows Caitlyn is now caught between the rock and hard place of her political beliefs and her personal life and is receiving support in neither.