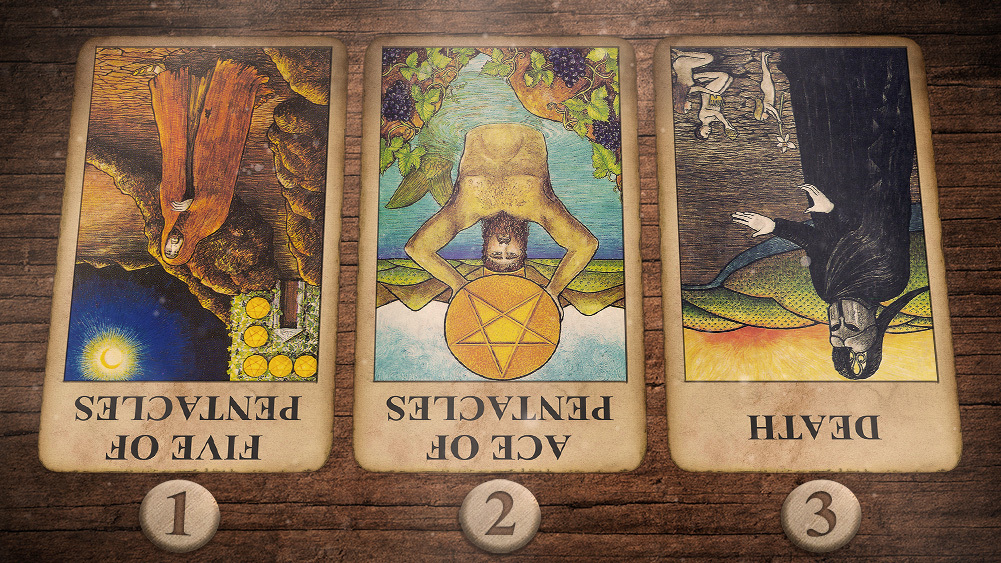 Quite often, when a card falls in the reversed position, it is seen as being rather negative; sometimes even quite negative. But when the Five of Pentacles falls reversed, it is a sign of some very good things to come, especially in a daily draw. It also just looks better because when it’s upright, the robed male figure is quite ominous and a bit scary as well as creepy. If you have been dealing with some struggles and stressful times, the reversed Five of Pentacles will show up signaling the end of your darkness and troubles is near. This card is here to tell you that standing firm and persevering will soon pay off and that the light at the end of the tunnel is not a train but rather something to look forward to. Allow this card to lighten your mood and give you hope. If you’ve been alone and struggling, this card will herald the beginning of a new personal connection. It also foretells of recovery from physical ailments as well as improved luck and better financial circumstances ahead. Two of the more important indications of the Five of Pentacles falling reversed are forgiveness, either you finding it within yourself to forgive someone who wronged you or you receiving forgiveness from someone you hurt. It also speaks of removing toxic persons and heralds increased stability and overall security.

The Ace of Pentacles coming up reversed for you in a tarot reading can be quite negative and possibly a bit overwhelming as it signifies insecurity, scarcity and depleted resources. Due to these potentially overwhelming conditions, you may find yourself acting in rather uncharacteristic ways, taking chances and pushing the limits. This includes testing the boundaries of the law to get your needs met. You may be acting out of greed or in a miserly fashion choosing to not share or be open to assisting others in any way, despite how bad off they may be … much worse than yourself. It is possible you may be acting this way out of fear that you will not be able to replace or recoup anything you may choose to share. Maybe your attitude is such that no one ever helped you, why should you help someone else. Perhaps you are lacking resources due to poor planning or effort on your own part. Poor budgeting could also be indicated by the Ace of Pentacles, reversed, which means you have more going out than coming in. This card could also represent missed opportunities or lack of opportunities. Also indicated are opportunities, prospects or deals falling through. The reversed Ace of Pentacles speaks of delays, lack of planning and poor control so insure you are putting the work and planning into achieving your goals when it appears.

The Death card is not to be taken lightly, even in the reversed position. But know that when coming up in a tarot spread, it rarely indicates the actual death of someone. At times, it does, but this card also reminds us that the only true guarantee in life is death. This is made evident by Death looming so large over the three figures before him, one of whom is offering a gift of a flower to Death while the other two look to be pleading with Death. There are times when death is a welcomed release for those who have been suffering. But in a tarot spread, death usually is an indicator of some new and positive things to come. Death quite literally means a falling away of the old and the brining in of the new. If looking to make any positive changes in your life, the reversed Death card says that the time is not quite right for that to happen. Do not let this reversed card discourage you, just know that something much better awaits you and will come your way soon. This applies to all areas of your life from personal connections to home to work, etc. The two figures pleading with Death know that he can bring goodness into their lives and they are hoping for the best. The figure presenting Death with a gift is grateful for the stripping away of the negative situation which has been replaced with positive.

How Would You Evaluate Your Relationship?