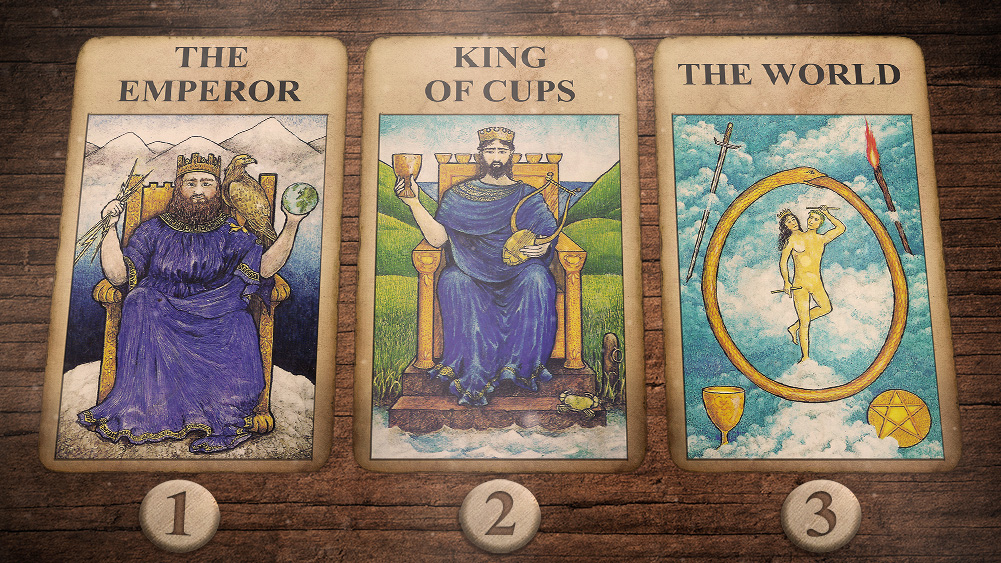 When looking into a specific potential romantic partner and the King of Cups turns up, you are on the right track with this new person and they deserve a bit more of your time and attention as they look to be an excellent partner, good person, honest and sincere. There is one small concern though if financial security in your romantic partner is important as many people with the emotional capacity represented by this card often lack the professional drive and ambition to build a solid financial base. The King of Cups also speaks of the wisdom (not the same as knowledge), compassion and open nature of people. If you have been struggling to find more of a balance between your heart and head or maybe between work and home life and the King of Cups shows up in your daily draw, he is there to tell you to stop struggling and relax then that desired balance will seemingly come naturally. The same applies if you have been working to gain more control over your own emotions. He is also speaking of letting go of things beyond your control. This kind gentleman touches on you advancing toward a deeper level of emotional or mental maturity, as well as expanding your creative side or possibly discovering a completely new and hidden talent you never knew you had. He is also urging you to rely more on your own intuition as it is growing and developing naturally on its own. The King of Cups also represents an excellent life partner if your goal is to build a solid family unit with someone who will always be by your side, a loyal, lifelong partner. Regarding professional or scholastic concerns, the King of Cups is indicative of a more mature masculine energy (male or female) who will be key in your advancement in either pursuit as a mentor or leader. This royal gentleman also urges you to call upon your own diplomatic abilities to work through any adverse situation involving other people be it professional or personal much like a mediator. Lastly, he speaks of careers in healthcare, both traditional and alternative, as well as artistic pursuits.

If The World turns up for you in a daily draw, it may mean “the world is at your feet” or you are currently – or will very soon be — in a position of limitless potential, surrounded by opportunities. When the world turns up for you, it is time to take full advantage of all the many doors being opened up to you in all areas of your life, especially professionally. The World coming up may also indicate travel, especially to destinations at a great distance. This card could also indicate new worlds being opened up to you in much the same way as I wrote briefly of in the intro with me having live interactions with clients all over the world. This could be through you literally traveling the world or just interacting with foreigners virtually/digitally through the miracle that is the world wide web. The World card represents a culmination of sorts. You have overcome the many overwhelming tests and stressors of the previous major arcana cards and have hopefully grown from it and learned as much as you can. Now is the time to reap the rewards of your struggles and through The World, many new opportunities are being presented to you and success is at hand. The potential is endless. Take pride in how far you have come and the obstacles you have surmounted. Pat yourself on the back and welcome what lay ahead. It has been a rough go for a while, but now is the time to just enjoy all of your hard work and what you have achieved. The World often represents the achievements of major life milestones such as graduations, a wedding, starting a family after much struggle, landing that highly sought-after job or buying that way over-priced new car that you earned yourself. It may represent major achievements such as starting your own business, completing a seemingly impossible task or goal, buying that house on the hill that always seemed so far out of reach. This card speaks of completion or culmination of your continued hard work and efforts of the recent past but it also warns that you not allow yourself to get too wrapped up in the good things as they can be stripped away just as quickly. With major success comes a whole new set of challenges and problems such as maintaining the new status quo. There is a popular saying, “More money, more problems.” Do not allow this newfound success to lead you to take on more than you can handle or may not be ready for. Be realistic and keep yourself in check. If The World turns up for you in a daily draw, know that spirit, God, the gods, the universe, whomever your higher power may be is smiling down upon you. It is your time! Enjoy, but make the best of it and use it wisely. Do not squander it.