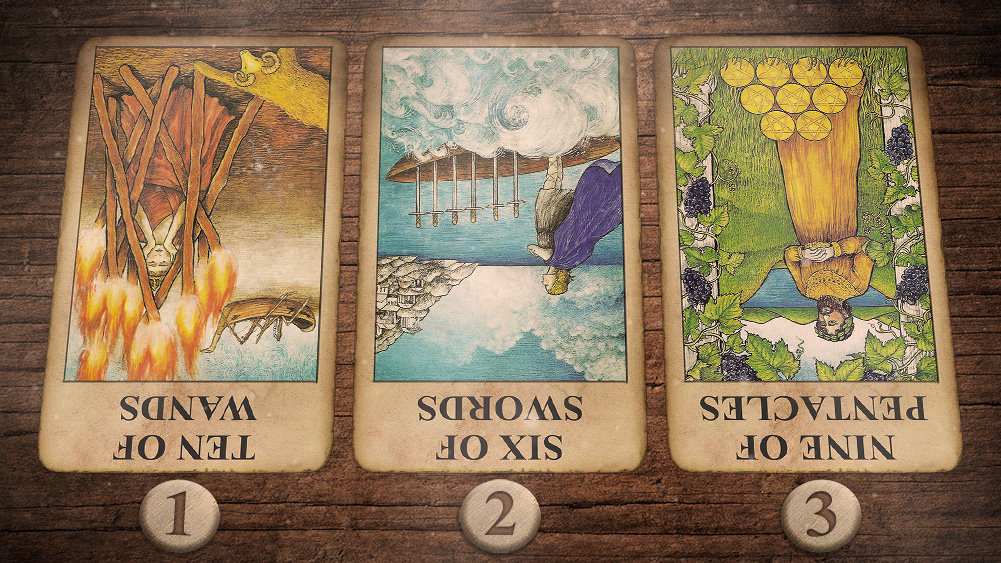 Shown on the Ten of Wands is a figure who appears broken and dejected amongst ten wands standing up against each other, each looking to be ablaze. The person looks scared and without hope. When reversed, the Ten of Wands indicates a strong sense of being overwhelmed and having far too much responsibility. Your load is heavy. Your stress level is great. When dealing with mental illness or depression and this card turns up reversed, it can indicate that a break is near. The time for serious action and prevention is at hand. Self-care Is very much called for. Alternatively, this card can indicate it is time to learn to set some boundaries and say no, delegate and do not be afraid to ask for assistance. Negatively, it can touch on shirking your responsibilities or pushing your work off onto someone else. Lastly, the Ten of Wands coming up reversed for a daily draw can indicate you are beating a dead horse or expending a tremendous amount of effort while gaining little in return. It is time to step back, reassess and come up with a new game plan, a plan B.

The Six of Swords frequently turns up in readings about travel and occasionally when you may be considering relocating to a new geographical location. Our card shows us a traveler traversing the waters to a new land seemingly at a distance. Unfortunately, when reversed as it is today, this often indicates trouble or, at the very least, delays to be expected. If this card comes up for you in a daily draw or general reading, it frequently means you may find yourself going from one bad situation to possibly an even worse situation. It denotes a lack of progress, feeling overwhelmed, stuck and an extended healing process. When speaking specifically about a person, this card may come up warning of a troublemaker or someone who simply enjoys rocking the boat and creating negative situations for others simply for their own enjoyment. When negotiating a new job or the purchase of a home/car, this card will turn up reversed urging you to stand your ground and know your worth but to also thoroughly read the fine print as the one with whom you are in talks with may slip something in without your knowledge that could potentially work against you in a big way. When looking at a relationship of any kind (romantic, friendly or familial), this reversed card indicates a storm may be brewing. If not dealt with quickly and effectively, this negative relationship situation will most likely seep into other areas of your life such as causing you to act rather impulsively or negatively in your work or business. If you have already found yourself in the midst of a negative relationship situation, this card will come up indicating that healing may take longer than you would like. More literal meanings of this reversed card of travel warn that you have a backup plan when planning any kind of trip. Expect delays, a myriad of disruptions and plans simply being cancelled all together.