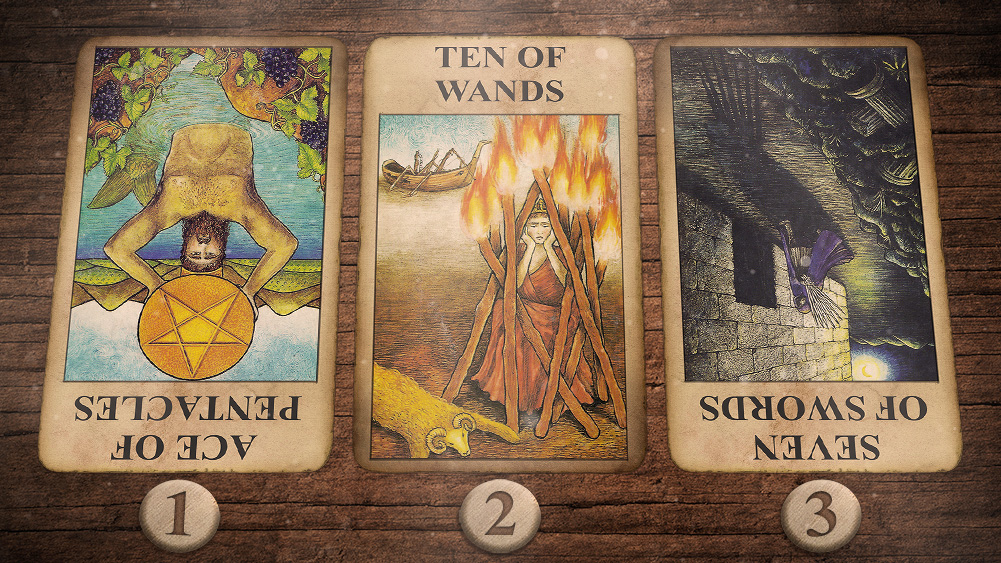 The Ace of Pentacles coming up reversed for you in a tarot reading can be quite negative and possibly a bit overwhelming as it signifies insecurity, scarcity and depleted resources. Due to these potentially overwhelming conditions, you may find yourself acting in rather uncharacteristic ways, taking chances and pushing the limits. This includes testing the boundaries of the law to get your needs met. You may be acting out of greed or in a miserly fashion choosing to not share or be open to assisting others in any way, despite how bad off they may be … much worse than yourself. It is possible you may be acting this way out of fear that you will not be able to replace or recoup anything you may choose to share. Maybe your attitude is such that no one ever helped you, why should you help someone else. Perhaps you are lacking resources due to poor planning or effort on your own part. Poor budgeting could also be indicated by the Ace of Pentacles, reversed, which means you have more going out than coming in. This card could also represent missed opportunities or lack of opportunities. Also indicated are opportunities, prospects or deals falling through. The reversed Ace of Pentacles speaks of delays, lack of planning and poor control so insure you are putting the work and planning into achieving your goals when it appears.

Sometimes we find ourselves in over our heads and quite possibly as a result of our own doing or making such as taking on much more than we can handle. The Ten of Wands may turn up for you in a daily draw to bring this to your attention. It may also represent a situation that started off as a good idea but has now become a burden. The Ten of Wands also indicates problems, responsibilities, being overburdened, overloaded and stressed. You may possibly feel as though you have a huge weight on your shoulders or may be feeling obligated, bound and restricted. The Ten of Wands could indicate you are being taken for granted or you may be dealing with some major struggles or challenges. It could be suggesting that you have taken on too much and may be heading for burn out. But on the upside, The Ten of Wands could indicate that the end is within reach. If you just hang in there a little while longer and keep going, you will ultimately achieve success. The Ten of Wands could also signify delays, losing your way, losing your focus and having an uphill struggle. It can indicate that the fun or spontaneity has gone out of your life. Time to change things up.

If you have been acting in a reckless manner or taking risky chances, the Seven of Swords will come up reversed for you as a warning that you need to take heed as you will very soon be caught and what you thought were your best laid plans are about to blow up in your face. This card may fall in a daily draw for you to be cautious as you may find yourself dealing with serial cheaters, pathological liars or two-faced persons as well as toxic people or any others who may mean you harm in some way. This could also be representative of your own recent actions. If you have not been acting in accordance of the greatest good for others, it is high time to make some much-needed changes. The reversed Seven of Swords could turn up in your daily draw to serve as your own conscience and hold up a mirror to your recent actions and/or motives. Maybe you have been taking credit of the hard work and achievements of others or acting in a cowardly fashion as well as trying desperately to avoid the consequences of your own bad behaviors. If you have been acting in negative or devious ways, it is time to step up and take ownership of your actions and make the much-needed changes to rectify the situation as well as greatly improve your own actions and motives. If you do not, the reversed Seven of Swords will turn up for you as a warning that the consequences resulting from you taking ownership would be far less than for someone to call you out on it which will very soon be happening. Lastly, this card serves as a warning that someone is trying to con you or take advantage of you in some way or another unscrupulous person will soon attempt to blackmail you. If you get this card, it’s time to check yourself.