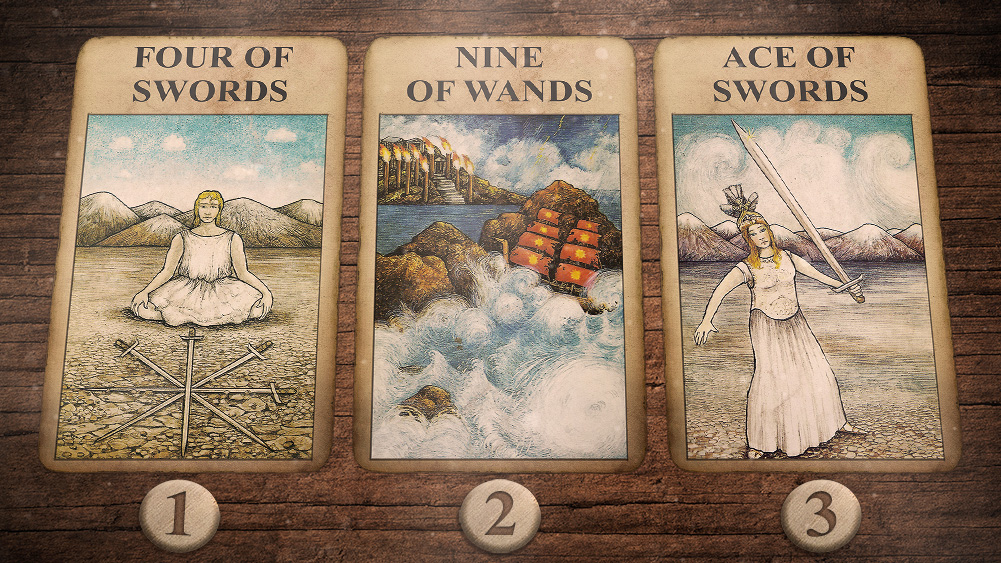 The Four of Swords will often turn up when you are feeling anxious, overwhelmed, lost or confused. This card indicates a need for stepping back, looking within and getting right in your spirit and at your core being. On the Four of Swords, we see a person appearing to be deep in meditation with four crossed swords laid out before them. Through this, we can see the potential benefit of removing ourselves from a situation to try and gain a different perspective as well as recuperate and just get our minds right. Among some of the other issues possibly needing to be addressed when this card shows up for you are fear, mental illness and simply just needing a break. The four crossed swords before our person represent the answers you could find by stepping outside of yourself or the situation. They also show the new, and hopefully better, perspective gained through meditation and a simple time out. When this card falls for you in a daily draw, it is there to give you permission to put yourself first for a bit for the betterment of your own well-being. You could be in denial about some emotional or mental issues and this card is there to hold up a mirror to your core. Putting yourself first is not license to be selfish, only to look within and nurture your spirit and find the answers for which you have been looking.

The imagery of the Nine of Wands may cause you to catch your breath a bit as we see a ship seeming to crash upon the rocks in the sea just a few miles away from shore with other hidden rocks (hidden potential danger) just visible above the crashing waves. But this card also speaks of hope and salvation as the safety of the shore is so very close. This card calls for persistence, perseverance and courage right now to help you overcome your current obstacles and struggles in an effort to achieve success … or at the very least, a better overall situation. This card will often turn up when you are in the midst of a hard-fought battle and feeling exhausted, fully spent and just about ready to call it quits. This is not the time to give up. Rather you must dig deep to see things through until the end. Among the things sometimes represented by this card are your own courage, strength of will and determination. If you have been struggling greatly, know that the end is near. Lastly, this card urges you to learn from your past mistakes and fight the good fight rather than a dirty one. Don’t be underhanded as you will only end up being the bigger loser in the end.