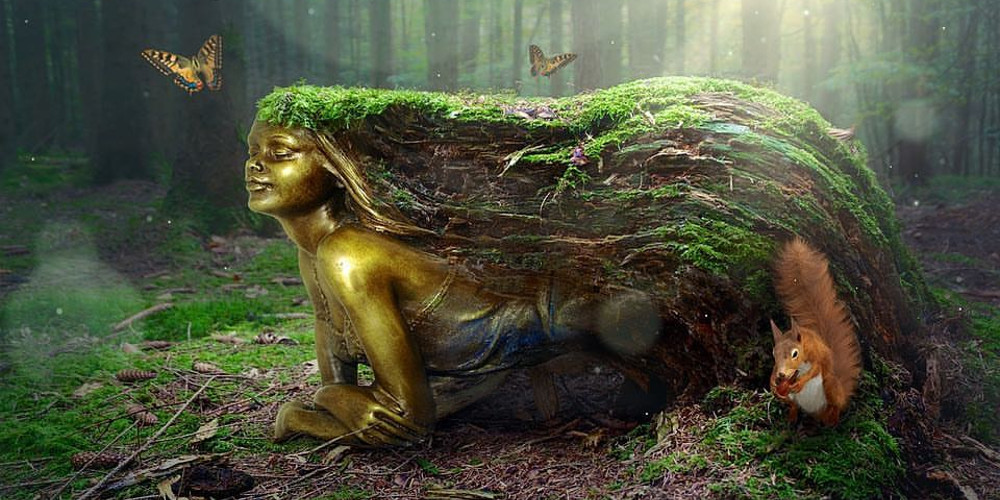 The Elemental Kingdom of Humans, Fairies, Elves And Gnomes

If you are a halfway decent psychic, it is easy to pick up someone with heavy elemental energies. They are usually nature lovers, find angels a friendly and supportive part of their life, rarely find an animal they cannot relate to and usually have a few extra pounds they are forever trying to get rid of. Those extra pounds are usually what grounds them to this reality.

When someone has incarnated with a heavy dose of this Elemental energy, the signs are all there. They are still carrying many of the characteristics of their previous existence. Their hands are delicately formed, their eyes have a watery and luminous appearance, their skin seems to have a translucent glow, high sensitivity to light and sound and regardless of their body type, they carry a gracefulness about the way they move. They are usually hypersensitive to their surroundings and are often mistaken for being emotionally and/or mentally unhinged because of this sensitivity.

So, what exactly is an elemental? One of the reasons why we feel so good when we are around plants, flowers, animals and nature in general is because of these powerful healing beings, known as the ‘Elemental Kingdom’. Think Earth Spirits, Nature Angels, Fairies, Elves, Gnomes, etc.

They are made up of an ethereal substance that is unique and specific to their particular element. They are living entities oftentimes resembling humans in shape but inhabiting a world of their own. They are the seen and unseen forces who rule over the flowers, plants, trees, soil, sand, rocks, stones, crystals and all living beings. Basically, the living heart of Gaia who we reside upon and everything that encompasses it.

Nature Angels or Elementals live among plants, water and animals and are responsible for the therapeutic effect related to nature and the outdoors. Every living creature and natural element (such as water and rocks) have guardian angels of different kinds.

There are many different types of beings in the Elemental Kingdom, including ‘mythical creatures’ such as leprechauns, elves, fairies, sylphs, mermaids, brownies and tree-people. They are also like children in that they don’t fully understand the results of their powerful actions, such as responding to fiery temperaments around them and then creating a real fire. They are greatly affected, as all nature spirits, by humanity’s thinking and behavior.

There are four basic essentials of the Elemental Kingdom, with each of the four elements holding the nature spirits that are their spiritual essence.
Fire
Air
Earth
Water

Fire spirits teach us about the dynamic energy of our life-force; that spark of ‘divine fire’ that resides in us all. This life-force or ‘divine fire’ within calls us towards the light and awakens our sleeping spirituality as fire has the ability to purify, burn, cleanse and destroy the ‘old’ so that the ‘new’ may emerge. Creative fire inspires and encourages spiritual fortitude. The lightening flash of fire is the ultimate as it brings exceptional spiritual growth and soul illumination. Fire Elementals, often seen as Salamanders, guard the secrets of the transformational energy of fire and are often found in large numbers around volcanoes.

Air spirits such as Fairies, can be found wherever there are plants and/or animals. They may often appear as tiny, twinkly colored lights or swirling mists. Fairies are the Elementals who are primarily involved with animals and pets but also with healing humans. Animals have fairies as their guardian angels and those that live in or upon water have ‘sylphs’ as their guardian angels. Fairies can also act as guardian angels for people whose life purpose involves nature, ecology and land conservation as well as animal welfare.

Earth Divas often work with humans and are the guardians of sacred sites, ancient groves and temples. They are of the ‘mineral realm’ which includes crystals, rocks and stones. Leprechauns and Gnomes are part of this elemental energy and guardians of the trees and plants around them. Gardeners with “magic” hands usually have a great deal of assistance from earth Elementals.

Water spirits rule over the water and tend to the creatures that dwell within this realm. Water spirits teach us to cleanse and balance our emotions and to ‘go with the flow’. Water Elementals teach us about adapting to different situations with grace. That is why it is often recommended when emotionally overwhelmed, to get in water and just float. You are being cleansed by water spirits or water angels.

We have all come into contact with an Elemental at some point in our life. Highly intuitive people who are sensitive to nature, can actually see the fairies and gnomes in their own dimension. It is rare gift, as they easily shift in and out of our dimension, but possible. In human form, if you are alert and aware, you will recognize the traits. One of the coolest pieces of information given to me about Elementals is to always have a living plant by your bedside. Fairies are attracted to living plants and while you sleep, they will take away all the heaviness of the day. Works for me!

Are You a Spiritual Warrior?

Crystals of Power: Amethyst To Boost Your Intuition

5 Crystals That Can Boost Your Spirituality